Display name labels have been added as a video overlay option. Thank to Jcalado for helping out here and for creating a set of styles. You can configure a publisher with a label by using &label=some_name or by just leaving it blank; &label. If blank, it will prompt for the user’s input.

&showlabels or &showlabel will turn on this feature

Along with this change, some improvements to the auto-mixer were made, including detection and mix update of detected video aspect ratio changes.

New audio pipelines for streams have been added for both inbound and outbound audio streams. You can disable it mostly by using &noaudioprocessing or just &noap as a URL parameter. Added a compressor, limiter, and equalizer for the guests to tinker with.

You can change settings like Audio echo cancellation, noise suppression, and auto-gain dynamically during a live stream now. This will cause the video to flicker with some browsers and will only show if the browser supports it.

New TURN servers added to LA, Chicago, and I think New York? Anyways, these are all UDP-based TURN servers, while the previous set were TCP-based. You can check what TURN server you are connected to via the stats debug menu. (Ctrl + Left-click on PC; Command+LeftClick on macOS). UDP vs TLS is listed, along with the IP address, which opens up to show the hosted location of the TURN server. Check it out with https://obs.ninja/beta/speedtest​

A significant amount of work has gone into adding reconnection logic for audio and video devices. If unplugging a device or adding a new device to the computer, or if a device is temporarily disconnected, the new logic will try to handle it. This will hopefully solve problems with Bluetooth headphones disconnecting during live streams and not reconnecting.

The &fileshare sharing function has been improved; more stable and less freezing for remote viewers.

The chat window can now Pop Out, allowing you to type and read messages from another window. This cannot be shared cross-browsers, as it uses in-browser messaging. 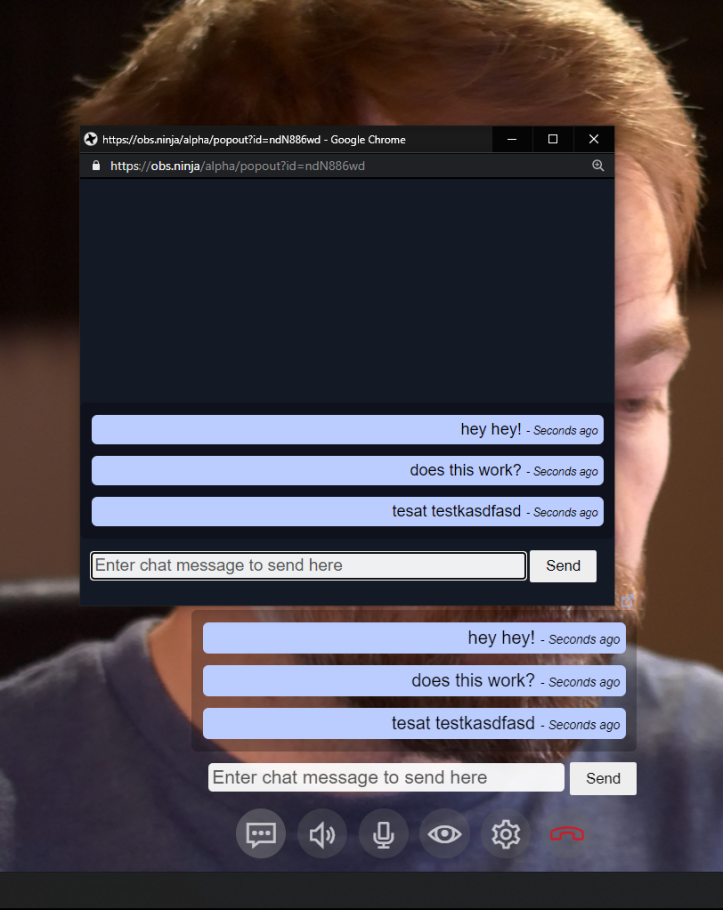 Numerous more guides have been written this month. https://guides.obs.ninja is slowly being populated with some more polished guides; on-going project there. A guide on how to Stream from OBS.Ninja into Zoom without OBS. (trying to minimize repeating myself with support emails) https://docs.google.com/document/d/e/2PACX-1vR_5D2BSi_SJ8_g-GGnC_DtoX7HYEhzPvGlLExMasWh3UBpRv-x8Bj0tbdYIXjfgzImVHd-oNJbOTYb/pub​